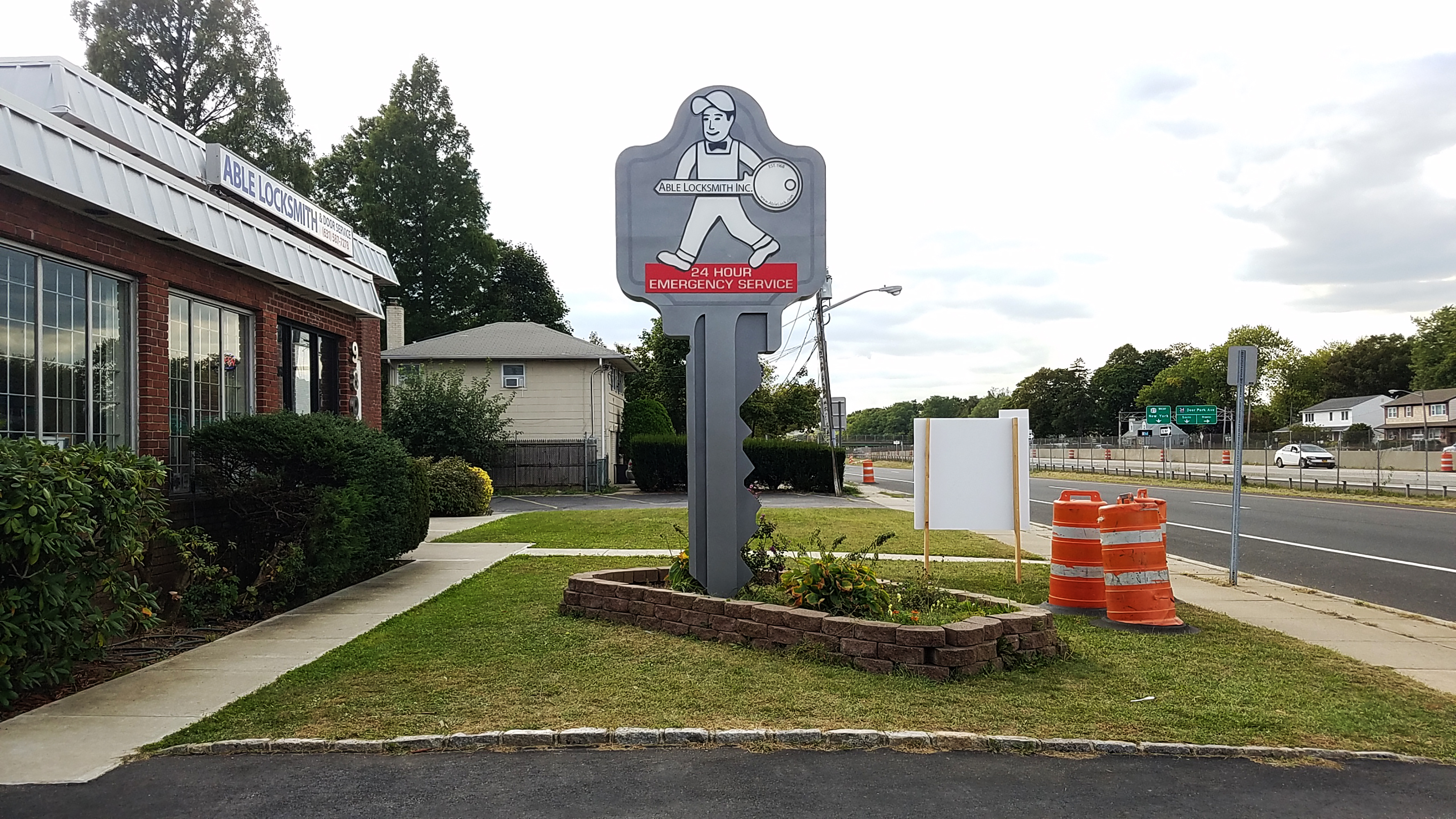 Several years ago, Able Locksmith approached us to fabricate a pylon for their new location in West Babylon.

Our first task was to update their logo, which had been created from a piece of clip art many, many years ago. Due to its technologically ancient origins, the logo was a bit rubbery in appearance. Designer, Kaitlyn Polansky, sketched a few ideas and came up with this new concept.

While they liked the fresh take on the company mascot, general consensus was that it was too much of a departure from their existing brand and worried it would negatively impact brand recognition. After several rounds of revisions, they settled on a much more subtle approach. Instead of changing everything, we switched out key components, such as the smile and legs to produce a cleaner version. 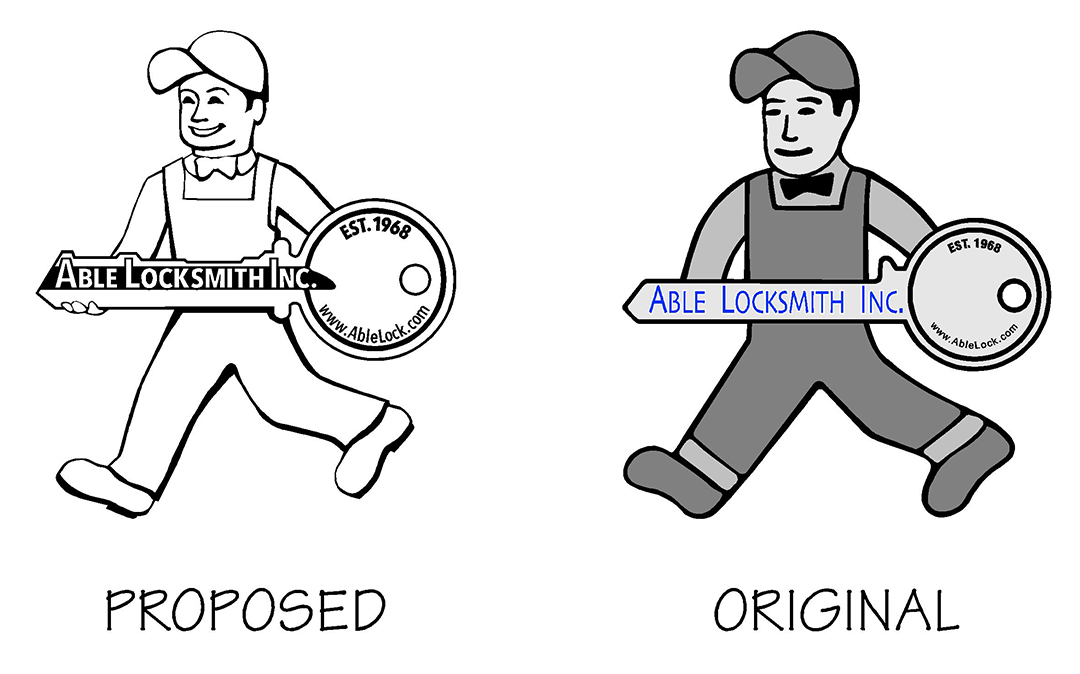 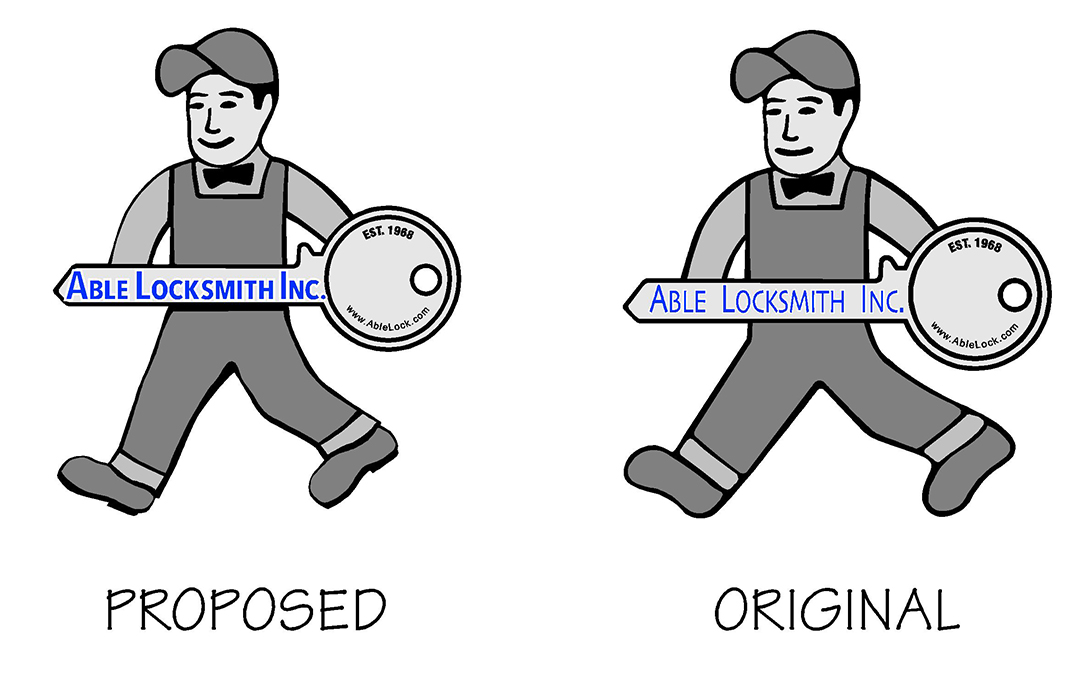 As soon as the client was happy with the new look, we set to work on their signage. The existing pylon was a standard double-face cabinet mounted to a post with aluminum cladding. Rather than simply replace the faces on the existing sign, Able Locksmith wanted to do something bold and unique to take advantage of their location’s visibility from Sunrise Highway.

To avoid an unnecessarily expensive and complicated installation, every change we proposed made use of the existing post and footing: a very common approach to this kind of project. Preliminary drawings led to the decision to make the pylon into a giant key.

While they liked our initial concept, Able said a skeleton key was too antiquated. They preferred instead to model the pylon after a key they provided. With a little more of the usual back-and-forth with concepts. We arrived at the new pylon design.

One question was how best to illuminate the sign. It needed to be visible at night, but the unique shape meant that a standard cabinet face wouldn’t look quite right. Fabricator, Dan Albino, suggested an acrylic push-thru, custom cut in the contour of the logo with vinyl applied.

To let as much light through as possible, the push-thru was cut from clear acrylic. A white diffuser film was applied to the inside to prevent onlookers from through to the interior of the cabinet. We applied red and black vinyl the face of the push-thru for the details in the logo and the “24 Hours” text.

As always, we test lit the sign while it was in the shop to ensure proper illumination of the sign face, no “hot spots” or shadows.

The last, and perhaps most important, phase of any project is the installation. The existing pylon was stripped down to the post and existing electrical before the new header and cladding went up. Once everything was in place, our installer tested the sign to ensure it was still illuminating properly.

We are pleased with how this project turned out and hope that Able Locksmith enjoys a lot of attention from drivers and pedestrians in the area.

If you like what you see here and would like help with a signage project of your own, please call 631-446-1121 or submit a request via our contact page.

Jacqueline’s Wedding: A Fond Look Back